Fourth Edition of the “Early History of the BVI” published 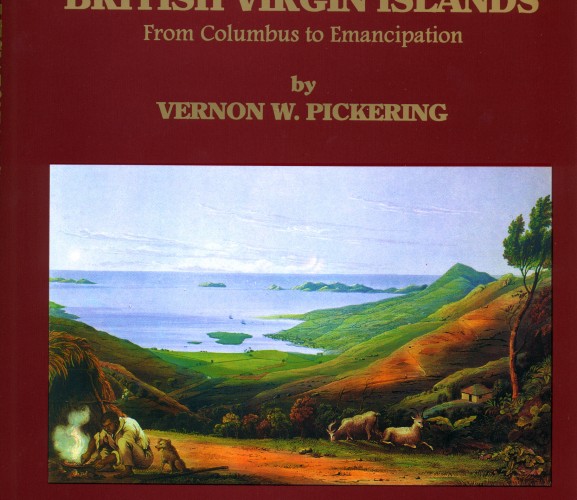 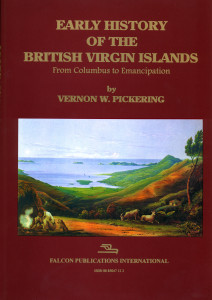 The fourth edition of the BVI’s best selling book, “Early History of the British Virgin Islands – From Columbus to Emancipation” has been published. The hardbound, A4, 248 page volume has over 60 large size illustrations and maps, including some historic documents and old prints, as well as colour plates and the colour reproduction of an 1819 historic map of the Virgin Islands. All previous editions of this popular book were sold out in 12 to 18 months.
This book tells about the vicissitudes of the British Virgin Islands from their discovery to the days when the premises for a more humane society were introduced.
These pages of History are full of well-known and less-famous characters — Francis Drake, Samuel Nottingham, William Thornton, John Pickering, Blackbeard and Columbus. Here and there you can catch a glimpse of the glitter of fabulous hidden treasures, you can leer at the grim shadows of pirates and buccaneers. The picture becomes lively from these pristine and peaceful beaches when the calm sea suddenly ripples and sometimes rises threateningly as a reflection of the “great” events which occur on both sides of the Atlantic Ocean.
It would seem that these islands have very little historical importance but if we read the book carefully we are forced to change our opinion. When Samuel Nottingham emancipated his slaves some sixty years before the emancipation proclamation, he set an unheard of precedent. The capital punishment inflicted upon Arthur Hodge, a white man, accused of having tortured and killed many of his slaves, was an absolute first. These two events influenced and may have accelerated some major historical developments.
We can also find a thorough examination of the African roots of many Virgin Islanders, with the portrayal of human beings cruelly torn from Black Africa and condemned to slavery. The immaculate scenery of these enchanting islands underlines each event, bluntly exposes and gives prominence to many details which would have failed to be observed elsewhere. Harsh contrasts are made evident: order and smuggling, superstition and religion, piracy and trade. Even Napoleon’s ghost is evoked with icy and equivocal irony when the name of Bonaparte is given to a freed slave.
In the placid waters we can see the ships of Columbus and Drake, the boats of the smugglers and the packets which allow the European continent to communicate with all of the islands, great and small, of the West Indies.
Impressive and not very well known aspects of the Virgin Islands are outlined: the horror of the missionaries for the lascivious dances of the Negroes; the Postmaster’s susceptibility in submitting letters to censorship; the contradictions of a religion professed to the point of bigotry, but almost never put into practice; and an eyewitness report on the working conditions at the Mount Healthy sugar works.
An overall view, which embraces Ursula’s legend, the adventures of the buccaneers, the transient conquests of the Quakers, the battles and the subterfuges for a government, and the rebellions of the slaves, throws new light on the hidden folds of a little known but fascinating past.

A FEW COMMENTS FROM THE AUTHOR 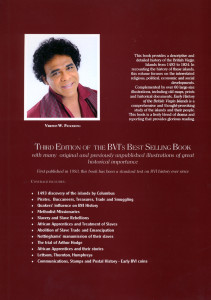 “Having familiarised myself with the history of the BVI over a period of almost thirty years I have come to the conclusion that BVI history defies a simple description. In fact, the BVI is not only the repository of Nature’s Little Secrets but also the repository of History’s Little Secrets”, says Vernon Pickering.
He added: “BVI history is not the conventional history of a small British colony; compared with the histories of its neighbours, the history of the BVI is not the usual quiet procession of events. As with its landscape, the smallest undulations relieve its cultural monotony, and it is exactly for this reason that the BVI is a most interesting laboratory for the study of the human response to landscape, geography and history — all prime ingredients of a people’s culture.”
Pickering further commented: “It is for this reason that Falcon Publications International have not remained insensitive to the need for a fourth edition of “Early History of the BVI”. In these days of fleeting change the need for cultural identity is becoming more and more evident. Additionally, our heritage has its foundations solidly planted in our history.”

COMMENTS FROM THE PUBLISHER’S CONSULTANT

Falcon Publications International consultant, Dr. Giorgio Migliavacca said that “Pickering’s book has the distinctive quality of bringing together in an accessible and attractive form, information scattered over a wide and often difficult-to-trace variety of sources. Fascinating information about almost extinct folk culture, or surprising but “unknown” facts from earlier centuries have been included in Pickering’s book. Falcon Publications International are sincerely convinced that this new book will increase the widespread enthusiasm to know more and more about BVI history and heritage.”

A RECENT REVIEW OF THE BOOK PUBLISHED IN NEW YORK

Mekeel’s has published a lengthy review of the book: “In my experience, there have been few definitive books about history of individual Caribbean islands…For the British Virgin Islands at least, Mr. Pickering has filled a need for a well researched and nicely executed hardcover book,” Everett L. Parker writes in his column This Week in Literature.

“As the name implies, the book is chronological, covering the period from discovery by Columbus in 1493 through the abolition of slavery in 1834. Pickering briefly touches on the earlier period when the islands were inhabited by Arawaks and later Carib Indians. We are treated to vignettes of early explorers in addition to Columbus, such as Francis Drake, and even so-called pirates such as Blackbeard. But perhaps even more importantly, we are treated to a thorough examination of African roots in the Virgin Islands,” Mr. Parker says.

“It’s a bleak history in many ways as the author traces the desperate conditions of people snatched from their homes in Africa and forced into slavery. It’s a story of deprivation and cruelty as they are forced onto ships and transported to the islands.
“Harsh contrasts are made evident: order and smuggling, superstition and religion, piracy and trade. Even Napoleon’s ghost is evoked with icy and equivocal irony when the name of Bonaparte is given to a freed slave. Impressive and not very well known aspects of the Virgin Islands are dutifully outlined, including the horror of the early missionaries at what they considered the lascivious dances of the Africans, the contradiction of a religion professed to the point of bigotry, but almost never put into practice, and an eyewitness report on working conditions at the Mount Healthy sugar works.”
The reviewer continues by stating that “the book is in three parts; the first is titled “From Columbus to Emancipation” and chapter outlines include the Quaker tradition, establishment of a civil government, Methodists in the islands, Negroes and other slaves, and the abolition of slavery.”
“The second part presents biographies of famous Virgin Islanders such as John Coackley Lettsom, William Thornton and the Humphreys. The third part — and which will be of most interest to philatelists — covers communications, and postal history of the islands.”
“Running to 248 pages, the book has an attractive burgundy cloth cover stamped in gold. And there is a nice dustcover, also in burgundy and gold, with the reproduction of a color aquatint View of Tortola from Ruthy Hill.”