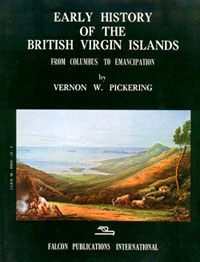 The fourth edition of the BVI’s best selling book, Early History of the British Virgin Islands – From Columbus to Emancipation by Vernon W. Pickering will be distributed internationally in 2006. The news comes from Falcon Publications International.

Pickering’s book was first published in 1983, a second edition followed in 1997, and a third in 2000. In all instances the book was a sell-out in a few months time. The publishers have also announced that they are working on a new and expanded edition in hardback of Pickering’s Concise History of the BVI – From the Amerindians to the Third Millennium. No publication date for this new edition was given by the Milan-New York publishers but the author has indicated that it may be in print before Christmas 2006.

Early History of the BVI provides a descriptive and detailed history of the British Virgin Islands from 1493 to 1834. In recounting the history of these islands, this volume focuses on the interrelated religious, political, economic and social developments. Complemented by over 60 large-size illustrations, including old maps, prints and historical documents, Early History of the British Virgin Islands is a comprehensive and thought-provoking study of the islands and their people. This book has been described as a lively blend of drama and reporting that provides glorious reading.

A Book Review from the Daily News in St. Thomas [PDF]