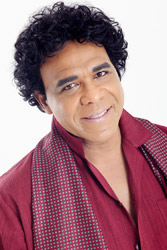 Vernon’s dream of a career in the arts began to materialize in New York when he studied at the Robert Joffrey Ballet. His innate love for music and singing brought him to musical theatre, where he began to find true happiness and was able to attain greater artistic expression. In due course he made recordings for Philips, Fonit-Cetra International, Falcon Records International and Polydor-Polygram.

Show business became his natural environment and as a result he performed on Broadway and London’s West End stages in a number of major productions including the legendary “Show Boat”, “Hair”, and “Jesus Christ Superstar”. Vernon also made several appearances on television shows both in Europe and the USA, as well as in four major films, including one that starred the French actress Brigitte Bardot. 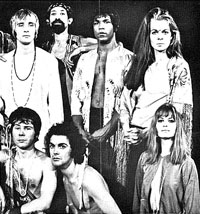 Also he has given concerts in Milan, Italy at both the Lirico and Gerolamo theatres. His numerous television appearances included shows aired by RAI and Canale 5 TV in Italy, and Montecarlo TV in Monaco. He also appeared in screenings of “Catch my Soul” (Othello Rock) by the BBC and ITV in England. There were also appearances on Swiss as well as Dutch TV, and Capodistria in Croatia.

Vernon’s artistic endeavours have been duly recognized by the many awards that have been made to him in Switzerland, Italy, Monaco and The Netherlands. He has received honours too from the Press Club of Milan, as well as the British Virgin Islands Ministry of Education, and the Department of Education and Culture. In recent years, the Lions Club honoured Vernon with the Citizen of the Year Award. 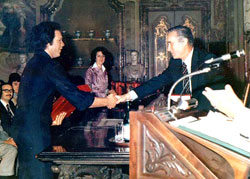 At the performing arts festival held on the island of Ischia (near Capri, Italy) he was presented with the prestigious Prince De Curtis Award as Vocalist of the Year. Among his many achievements as a singer, mention has to be made of his guest appearance at Festival-Bar, which took place in the historic Arena of Verona in Italy before a capacity audience. This popular festival is televised throughout Europe, and in that year also featured such celebrities as Olivia Newton-John, Julio Inglesias, Demis Roussos and John Travolta. 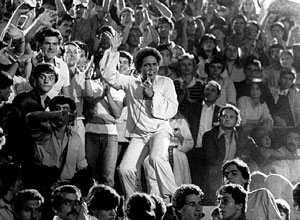 An LP that Vernon made for Philips-Polydor, became the fastest selling record of the year, and shortly after he appeared on a New Year’s TV Special from Asiago featuring the Bony M, Adriano Celentano and Bonny Tyler.

Vernon recorded the disco version of a famous Italian song called “Come Prima” which in English was named “You Forever” and became an instant hit in Europe. This was one of the most broadcast records of that time. This successful record was followed by a few singles including the disco version of “Natali” and by an LP titled “American Woman” (by Ploydor Records). Many of the numbers on the LP received television and radio exposure and songs such as “Bonny Bonny”, “When a Child is Born” (Soleado) and Bob Marley’s “Guava Jelly” have remained quite popular with disc jockeys and many fans. His repertory includes ballads and songs from composers such as Burt Bacharach, Umberto Bindi, Andrew Lloyd Webber, Paul Anka, Norman Newell, and Michel Legrand. 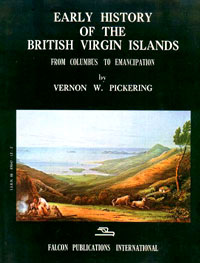 Vernon is a jolly person with a big smile and is also a most charming optimist. In addition to his many attainments in the world of art and entertainment, Vernon has made his considerable mark as an author too, and has had two important history books published: “Early History of the British Virgin Islands – from Columbus to Emancipation”, (published first in 1983, followed by two new editions in 1997 and 2000) and the companion volume, “Concise History of the British Virgin Islands – from the Amerindians to 1986″. He is at the present time engaged in researching and writing his third book on BVI history. Vernon’s books hold a great deal of interest for Americans as he was successful in reporting the vicissitudes of Europeans as they made their way through the Caribbean and later on became prominent figures in US history. These books are a must read.